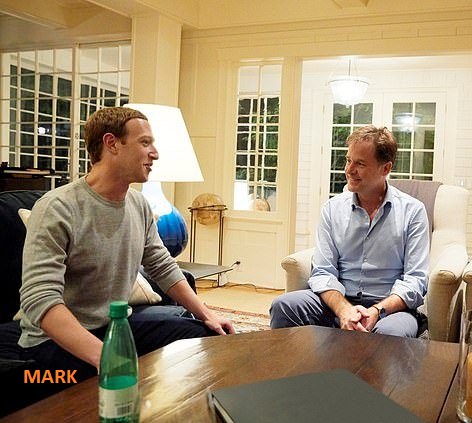 The billionaire has asked Britain’s former Deputy Prime Minister to take over from PR chief Elliot Schrage, who quit in June after a series of damaging scandals.

Sir Nick, 51, has agreed a contract that could see him paid more than £4million a year including share options, Silicon Valley sources told MailOnline today.

The giant pay packet is not unusual for the ‘big tech’ industry, but dwarfs his recent MP’s salary of £77,379.

He will be paid to lobby in Europe and the US where Facebook faces probes over its tax affairs and data breaches including the Cambridge Analytica scandal where app developers harvested information from millions of accounts.

Previously Sir Nick was highly critical of the company’s paltry tax bills and said the social media giant clearly wasn’t paying ‘all the tax they could’ in Britain.

‘I’m not especially bedazzled by Facebook. I actually find the messianic Californian new-worldy-touchy-feely culture of Facebook a little grating,’ he said two years ago.

‘Nor am I sure that companies such as Facebook really pay all the tax they could — though that’s as much the fault of governments who still haven’t got their tax act together.’

Facebook paid only £7.4m in tax in the UK last year despite collecting a record £1.3bn in British sales.

Vince Cable, the leader of the Liberal Democrats, said he would write a letter to Sir Nick: ‘I will be urging him to make sure Facebook co-operates with attempts to make sure they pay their fair share of taxes.’

He said: ‘He can help them to increase it to much higher levels. Perhaps he could dedicate a Facebook page on his actions and successes he achieves for UK plc.’

The former Liberal Democrat MP, who lost his Sheffield Hallam seat to Labour last year, will also end his personal campaign for a second EU referendum, which saw him join forces with Tony Blair and Sir John Major and flying across Europe meeting its political leaders.

Posting a video online he said he would help Facebook boss Mark Zuckerberg to ‘navigate the onward journey’.

In a statement on his Facebook page he said leaving before Brexit would be ‘a wrench’ but the move was ‘an exciting new adventure’.

But people were quick to mock him in comments under the post, saying: ‘looks like freedom of speech is doomed then’.

Before his career in politics the ex-MP worked in Brussels as an MEP and the Facebook billionaire believes he can build bridges with the EU.

He will lobby Eurocrats who are pushing for a new tech tax by next year and who are also promising more punishing fines for high-profile data breaches like the Cambridge Analytica scandal.

Last week, Facebook revealed new platform tools it says will increase transparency of political advertising as it faces investigations over the role of the adverts in elections around the world

It is also facing a potential £1.2 billion fine for a data breach that allowed hackers to access the personal information of 30 million users last month.

The Irish Data Protection Commission (IDPC), the lead supervising authority for Facebook in the EU, officially opened its investigation last week after the social media giant admitted hackers could have accessed the accounts of millions of users through a ‘vulnerability’ on September 28.

In America the company faces upcoming midterms where it must fight Russian interference and it still faces investigation in by the Federal Trade Commission and the Security Exchange Commission.

Mr Clegg may also help Mr Zuckerberg with his public speaking after he spent two awkward days stammering his way through Senate hearings this year.

Critics have today slammed the former MP’s new job as a ‘damning indictment’ of the revolving door between politics and big business.

Sir Nick is the most senior politician from Europe to work for Facebook and in a statement on his Facebook page he said he was looking forward to ‘an exciting new adventure’.

He added that the firm and its apps, including Whatsapp and Instagram was ‘at the heart of some of the most complex and difficult questions we face as a society’, over individual privacy, democratic integrity, the balance between free speech and prohibition online, artificial intelligence and the well-being of children.

He went on: ‘I believe that Facebook must continue to play a role in finding answers to those questions – not by acting alone in Silicon Valley, but by working with people, organisations, governments and regulators around the world to ensure that technology is a force for good.

‘I am looking forward to being part of this endeavour.’

Jon Trickett MP, Labour’s Shadow Minister for the Cabinet Office said: ‘It is a damning indictment of the sorry state of our country’s politics that, at a time when digital giants such as Facebook are rightly coming under public scrutiny, our former Deputy Prime Minister has been hired to lobby on their behalf.

‘Labour is committed to slamming shut the revolving door between politics and big business, which for too long has corroded public trust in politics.

He will start working for Facebook‘s global affairs and communications team in London in the coming weeks after Mr Zuckerberg looked to him for help with its ailing reputation.

Sir Nick, his Spanish wife Miriam, a partner at law firm Dechert, and their children will then move to California.

British PR expert Rachel Whetstone, one of the people said to be vying for Sir Nick’s new job, has recently moved to Netflix from Facebook.

The social network has been rocked by recent data scandals where millions of accounts were compromised.

Mark Zuckerberg had to give a number of humbling apologies this year and it is understood he personally pursued Sir Nick for the job.

Until now he has dedicated himself to campaigning for a second referendum and had written a book called How To Stop Brexit.

In his book he said there should be a second vote because the people who voted Leave were dying off.

Mr Clegg also joined former PMs Tony Blair and Sir John Major in their ‘shuttle diplomacy’ jetting across the continent arguing British politics had made it ‘viable’ for the UK’s exit to be stopped,

But in leaving for Facebook some have suggested he may believe that the referendum result cannot be reversed as he wished.

Lord Allan of Hallam, who was Clegg’s predecessor as Sheffield Hallam MP, is director of policy at Facebook.

The company is already facing tough questions over its treatment of customers.

Mr Zuckerberg, one of the richest and most powerful men in the world, has faced a barrage of criticism over Facebook’s privacy policies.

Under his stewardship Facebook has been accused of allowing Russians to interfere in the US election and spread ‘fake news’.

Earlier this year it emerged that the personal information of 87million Facebook users had been harvested by Cambridge Analytica, a data company that used the information to help Donald Trump win the US presidency.

Mr Zuckerberg was dragged before Congress to testify about its privacy policies in April.

Awkward and at times evasive, the one time Silicon Valley darling spent two days stammering his way through the hearings.

He was ridiculed online for everything from this clammy appearance to ill-fitting suit, and was even caught using a booster seat to make himself look taller than his 5ft 7in.

The UK’s information commissioner’s office has said it intends to fine Facebook about £500,000 over what happened – the maximum penalty.

A Congressional investigation then found that agents from Russia and other countries had been posting fake political adverts on Facebook since at least 2016.

Last month the social media giant admitted that a security flaw in its systems had allowed criminals to break in and effectively take control of millions more profiles.

The hack potentially gave the cyber-attackers access to vast amounts of personal data, including people’s addresses, email accounts and even bank details.

They may also have been able to access intimate family photographs, along with details of users’ personal lives, friends and hobbies. All of this information would potentially be a goldmine for fraudsters. It is one of the biggest cyber-hacks ever recorded.

A group of major Facebook investors have even called for Mr Zuckerberg to be ousted as chairman after the business lurched from crisis to crisis.

The backlash comes after the tech giant’s billionaire founder, who is also chief executive, was put on the back foot by a series of security and privacy scandals which have subjected the company to intense public scrutiny over its use of user data.

Those behind the proposal to remove Zuckerberg and make the role of chairman an independent position, include New York City’s pension fund and Trillium Asset Management.

Scott Stringer, manager of the £122bn New York fund, said: ‘An independent chair is essential to moving forward from this mess.’ 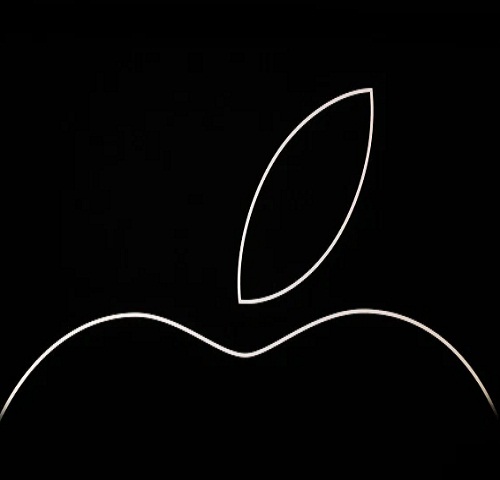 Apple Is Reportedly Aiming To Develop Its Own Search Engine 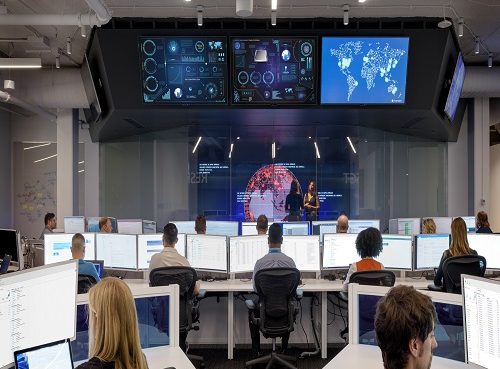 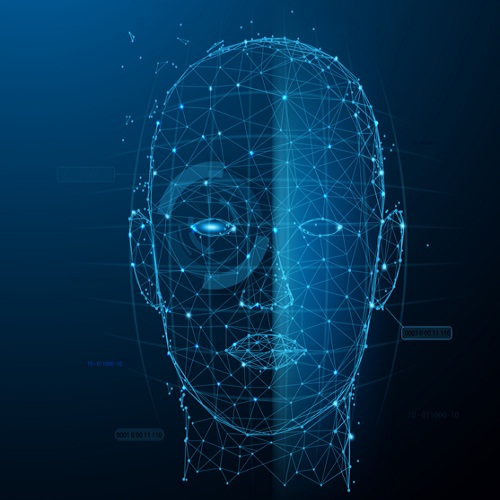