The largest individual structure humanity has ever created is not a skyscraper, a pyramid or even the Great Wall of China: it’s a landfill.

Fresh Kills landfill on Staten Island absorbed hundreds of millions of tonnes of New York’s rubbish in its 53-year life. The site closed in 2001, but at its peak it covered 890 hectares.

Out of sight and out of mind for most people, landfills play a crucial role as a final resting place for household, medical and industrial waste. In the UK we recycle more than ever before, yet data from the Environment Agency shows that we still put close to 50 million tonnes of rubbish underground every year. And that’s a problem because, owing to regulatory pressures, we’re not opening up new landfills at a rate that can accommodate all this waste.

As the UK’s 330 landfills inch closer to capacity, there has been a growing chorus of calls to find new ways of dealing with them. Digging new sites is politically and environmentally unpopular, so there is a real incentive to find ways of dealing with landfill better, or even avoiding the need for the sites altogether.

One intriguing solution is landfill mining, a higher-tech version of what’s already a grim reality in some places. “In many ways, it’s like the classic extraction of minerals,” says Dr Adam Read of SUEZ, a waste management firm. Diggers tear up the ground over an existing or closed landfill, before this is fed into a perforated rotating drum – known as a trammel – which allows soil to fall out, while larger materials are retained. Whereas in a normal mine the aim is to collect ore, in landfill mining the goal is to collect goods that can be recycled and sold on. Yves Tielemans of Machiels Group describes how his company is in the early stages of one of the world’s largest landfill mining operations at its Remo site in eastern Belgium. “Once we have stabilised the environment to avoid gas emissions, trucks will start collecting the rubbish,” he says. “This will then be fed into our on-site recycling plant where we will use standard waste sorting machines – with magnets to separate out metals, and other separators for paper, card and plastics.”

Machiels hopes to recycle as much of the waste in the site as possible, before selling on anything valuable.

Landfill mining seems promising, yet it has its limitations. Read of SUEZ, who has done feasibility studies of landfill mining, argues that, from an economic perspective, digging up entire landfills is rarely worthwhile. In most places where landfill mining has been trialled, there has been another motive for digging up the land, such as the construction of a new road – only then does it make sense to try to extract any buried goods at the same time.

Professor William Powrie, a waste expert at Southampton University, says that the contents of a landfill are unpredictable – in some cases there may well be valuable materials buried there, yet in others you may just end up digging up boxes of asbestos. Machiels knows its Remo site and its contents well, having managed it for decades – but for other landfills a lack of clarity about what’s buried underground makes mining a real gamble.

What about burning waste? In many countries, waste-to-energy (WTE) plants do this on a large scale, burning municipal waste in huge chambers. Besides avoiding the landfill problem, the energy produced from burning rubbish can be used to turn turbines. Sweden is especially well known for its WTE plants which produce heat for more than a million homes, according to a government website.

Of course, standard WTE requires combustion – which releases the greenhouse gas CO2 as well as many other potentially toxic gases. You’re also left with a large amount of ash and other materials that can’t be burnt and that still need to be put somewhere. One solution to this conundrum might just be with a process called ‘plasma gasification’, which uses extremely high temperatures to turn waste into gas in an oxygen-free environment.

A plasma arc is a kind of torch that is made by passing a gas, such as argon or nitrogen, between two electrical contacts. This creates an extremely hot torch that is capable of melting and vaporising pretty much anything that it is fed. Plasma arcs are not exactly a new technology. However, companies have been experimenting with methods of enhancing the process to deal with household and municipal waste.

Energy for the grid

The French firm CHO Power has developed a waste treatment centre that uses plasma gasification. Spokeswoman Anne Borderes explains that, first, any recyclable goods are separated, leaving only basic plastic and other low-value waste. This is ground down before being fed into a chamber that reaches 800°C in the absence of oxygen. All the materials melt and vaporise into carbon monoxide and hydrogen – a mix known as syngas (synthetic gas). However, at this temperature, the syngas contains impurities as well as potentially toxic fumes.

So, at the exit of CHO Power’s first chamber, the syngas passes through a plasma torch that reaches 1,200°C. Borderes says this further breaks down any remaining long carbon chains in the syngas via a process called ‘cracking’ to create a pure, high-calorie energy source. This is then burnt in much the same way as natural gas, to turn either steam turbines or gas motors and produce electricity for the grid.

Plasma gasification presents an intriguing possibility for waste treatment, yet it has only been tested on a small scale. CHO Power’s site at Morcenx in southern France currently only treats non-toxic household waste. And, although the firm believes it would be feasible for almost any mid-sized town to have its own plasma gasification waste treatment plant, building such centres remains costly. 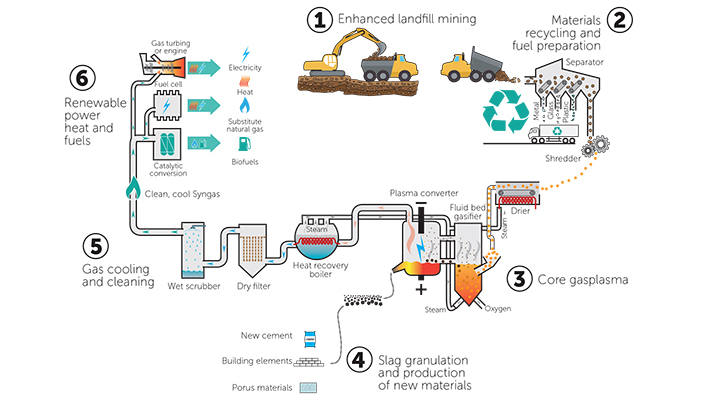 A different proposal is to use the methane produced as waste breaks down in a more creative manner than is done today. For decades, companies have tried to capture the methane produced inside landfills when organic waste is broken down anaerobically – this can then be burnt to produce a steady stream of electricity. However, researchers are looking into ways of doing this more efficiently.

Powrie describes a trial his team carried out with a ‘bioreactor’ in Shropshire. A bioreactor is a device that supports the organisms that break down organic waste and channels all the methane they produce efficiently away. Everything that’s left over can be used as fertiliser.

But, while this process works in theory, Powrie describes some obstacles: “It was harder than we expected to get the right kind of organic waste into the bioreactor. Garden waste such as grass cuttings would have been ideal, but it often ended up containing non-organic material like garden hoses and rocks.” The need to purify and separate out organic waste from other materials is therefore a challenge.

Powrie adds: “To generate enough gas to create the kind of electricity that would make a bioreactor worthwhile, your plant would need to be large.” Too small and it wouldn’t be viable, too large and councils could expect a public backlash.

As landfills fall out of fashion, there’s a growing range of initiatives that aim to treat waste more effectively. However, most of these proposals are only just getting off the ground, and face their own drawbacks.

A well-managed landfill still presents one of the best ways of storing dangerous, toxic and low-value waste. Perhaps the real solution is to develop more sophisticated, long-term thinking about how rubbish is sorted at the beginning.

Powrie argues that, in an ideal world, everything we make would be “designed to be de-manufactured and recovered,” rather than being thrown in a hole in the ground. But, for the time being, landfills will remain among humanity’s largest creations.

In the past, landfills were little more than rubbish heaps. Today’s sites are far more sophisticated.

Once the landfill itself is dug, protective liners are laid to reduce the risks of hazardous substances leaking. The landfill is then divided into cells which include in-built methane collection pipes, as well as pipes for collecting ‘leachate’ – the liquid run-off which gradually builds up. The methane pipes are designed to collect gas as organic materials break down, and it is burnt. The leachate is treated separately, and once cleaned is siphoned off into local watercourses.

As dustbin lorries collect waste, it is brought to the ‘tipping face’ where it is dropped into a cell. At the end of each day, the cell is covered in soil to deter vermin. Once the entire landfill is full, it is then covered in more layers of soil and can, in theory, be used for light agriculture or recreation grounds. Most landfills continue to be monitored for decades after closure to check for potentially explosive gas build-up. 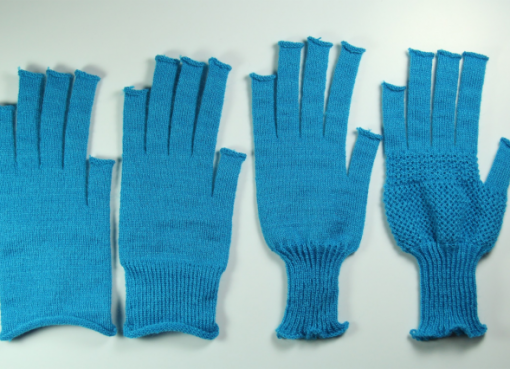 AI Can Innovate By Itself. Time To Amend Our Patent Laws?