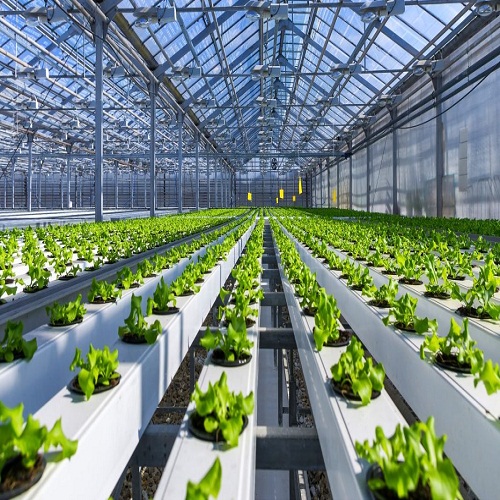 In a bid to tackle drought and an economic crisis that has left millions needing food aid in Zimbabwe, a 50-year-old mother of two, Venencia Mukarati is using hydroponics to grow vegetables which she supplies to restaurants in Harare.

Mukarati, who is also an accountant, always had a passion for farming. In following her dreams, she discovered a web search on how to grow vegetables on the deck of her house, by importing a small hydroponics system from Cape Town for $900 that enables plants to draw soluble nutrients from the water.

In the beginning, she started with planting fresh vegetables for the family as the country’s economic fortunes deteriorated and grocery store prices spiralled. But with time, she realized her pastime could be a profitable venture making her explore the market.

Initially, she grew 140 plants per cycle but now she produces 2,600 plants including lettuce, cucumbers, spinach and herbs in two greenhouses fed by a makeshift system using gutter pipes from the roof. It takes six weeks for Mukarati to harvest vegetables such as lettuce compared to 10 weeks if the crop is grown in the soil.

Lesley Lang, a restaurant owner who buys Mukarati’s produce twice a week, said Mukarati’s lettuce is the best lettuce she has ever had the pleasure of buying in Zimbabwe. Mukarati makes a profit of $1,100 a month in a country where some government workers get just $76.

However, Mukarati hopes to quadruple production from June by constructing bigger greenhouses on 2,600 square meters of land on the outskirts of Harare.

Hydroponic farming is a system of growing plants with minimal soil or no soil at all, instead of utilizing nutrient solutions to aid healthy growth processes. Hydroponic farms are located in temperature-controlled indoor environments outfitted with special irrigation systems. They allow for the year-round cultivation of hydroponic vegetables and fruit.

In hydroponic farming, water is conserved because it is reused multiple times, and hydroponically grown plants also require no pesticides because there are no soil-borne diseases.

According to Mukarati, “The good thing about hydroponics is that it saves water by 90 percent, in a 46 square-meter greenhouse where water flowed in a maze of pipes decked with plants. She further said that she buys water because she doesn’t possess a borehole, thereby restricting her from conventional farming.

Southern Africa is in the grips of a severe drought, as climate change wreaks havoc in impoverished countries already struggling to cope with extreme natural disasters, such as Cyclone Idai which devastated Mozambique, Zimbabwe and Malawi in 2019.

The temperature in the region is rising at twice the global average says the International Panel on Climate Change, spurring the need for innovative ideas to get food on tables.

Thus, there is a need for the government to adopt and encourage hydroponic farming. The government also needs to invest in African hydroponic manufacturers that specialize in the installation and marketing of customized smart hydroponics systems. This will help small and medium-scale farmers have access to high quality, cost-efficient and sustainable ways of farming. I’m The Only Female At My Job: A Life Of An Oil And Gas Engineer At Sea