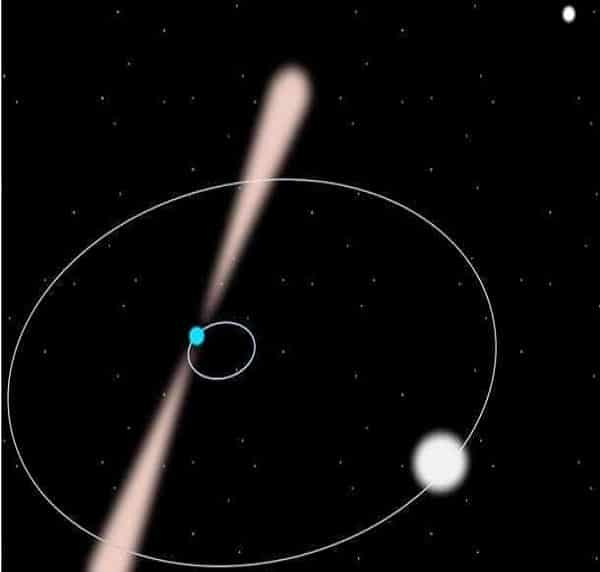 Researchers from the University of Manchester found that the pulsar – a type of neutron star – and a white dwarf accelerated to another star at the same pace.

This is the strong equivalence principle – it says any two objects in the same gravitational field will fall with the same acceleration regardless of their mass.

There was speculation that this wouldn’t apply in particularly extreme environments, such as those of pulsars – a type of neutron star, but this study proves it holds true. 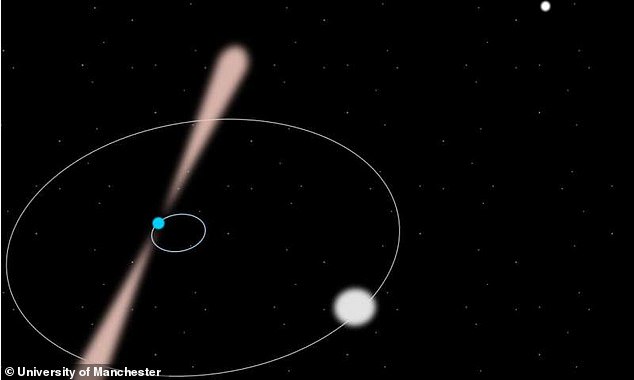 Observations of a pulsar and white dwarf orbiting another star helped astronomers prove a cornerstone of Albert Einstein’s General Theory of Relativity right – again. Artist impression of this particular star system with the second white dwarf in the top right corner

It’s also known as freefall and this is the second time the theory has been shown to be accurate – the first was from observations of a star orbiting a black hole.

PULSARS ARE COLLAPSED DEAD STARS THAT GIVE OFF INTENSE RADIATION

These stars are made of matter much more densely packed than normal and which give the entire star a density comparable to an atomic nucleus.

The diameter of our sun would shrink to less than 18 miles if it was that dense.

These give off radiation in a cone shaped beam which sweep across the sky like the light from a lighthouse as the star rotates.

British astronomer Dame Jocelyn Bell Burnell was the first person to discover a pulsar in 1967 when she spotted a radio pulsar.

Guillaume Voisin at the University of Manchester said the idea of gravity pulling two different mass objects at the same rate was first posed by Galileo in his Leaning Tower of Pisa thought experiment.

Galileo said if two different mass spheres were dropped from the famous tower at they would hit the ground at the same time – Einstein theorised this idea would still apply to stellar objects in the same gravitational field.

However, some theories of gravity suggest a pulsar would behave differently to other stars or planets – such as the way the Earth and Moon orbit the Sun.

Voisin found that the pulsar and white dwarf, in this trinary star system, orbited exactly the same as one another – as expected from Einstein’s theory.

This is the highest precision test of the equivalence principle ever performed on such massive objects, the Manchester team said.

It was ‘1000 times better than anything done on neutron stars before’, said Voisin.

For the experiment the Manchester team used a radio telescope to accurately observe the signals produced by pulsars.

This particular pulsar was called PSR J0337+1715 and it was discovered by the beam of radio waves it emits as they sweep across space.

‘At each turn this creates a flash of radio light which is recorded with high accuracy by Nançay’s radio telescope,’ said Voisin.

‘As the pulsar moves on its orbit, the light arrival time at Earth is shifted.

‘It is the accurate measurement and mathematical modeling, down to a nanosecond accuracy, of these times of arrival that allows scientists to infer with exquisite precision the motion of the star,’ he said.

This particular pulsar was in a particularly unique system 0 orbiting with two white dwarf stars – that gave them the opportunity to see if pulsars follow freefall.

This particular pulsar – a type of dead star – was 1.44 times as massive as the Sun when it was alive but has since collapsed into a 15.5 mile sphere.

Some scientists have speculated that a pulsar, which is held together by its own gravitational pull, wouldn’t behave the same way as ‘normal’ stars. 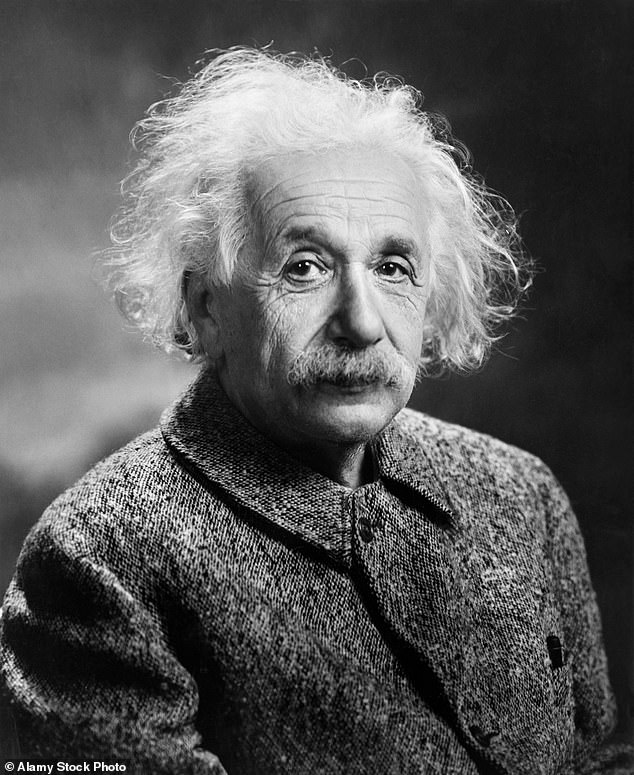 This particular pulsar – a type of dead star – was 1.44 times as massive as the Sun when it was alive but has since collapsed into a 15.5 mile sphere. Artist impression of a pulsar

If this had proved to be true it would violate general relativity as a universal rule – but fortunately for Einstein’s long-standing theory – the pulsar did as expected.

The Manchester team used extremely accurate measurements of the light from the pulsar to calculate how it was gravitationally linked to the other white dwarf.

One white dwarf orbits the pulsar every 1.6 days at a distance 10 times closer to the pulsar than Mercury is from the Sun.

They then both orbit a third star – a white dwarf that is 40 per cent the mass of the Sun located about the same distance from the pulsar as the Earth is from the Sun.

In our solar system we’ve been able to demonstrate, using laser experiments, that the Moona nd the Earth are identically affected by the gravity field from the Sun.

In this experiment they found that the extreme gravity field of the pulsar didn’t impact on the freefall concept – that it follows the rule and the General Theory of Relativity stands true.

‘The only theory of gravity that strictly follows the equivalence principle is general relativity – every other hypothesis breaks it at some level,’ the lead author explained.

The findings have been published in the journal Astronomy and Astrophysics.

Albert Einstein (pictured) published his General Theory of Relativity in 1915

In 1905, Albert Einstein determined that the laws of physics are the same for all non-accelerating observers, and that the speed of light in a vacuum was independent of the motion of all observers – known as the theory of special relativity.

This groundbreaking work introduced a new framework for all of physics, and proposed new concepts of space and time.

He then spent 10 years trying to include acceleration in the theory, finally publishing his theory of general relativity in 1915.

This determined that massive objects cause a distortion in space-time, which is felt as gravity.

At its simplest, it can be thought of as a giant rubber sheet with a bowling ball in the centre.

Pictured is the original historical documents related to Einstein’s prediction of the existence of gravitational waves, shown at the Hebrew university in Jerusalem

As the ball warps the sheet, a planet bends the fabric of space-time, creating the force that we feel as gravity.

Any object that comes near to the body falls towards it because of the effect.

Einstein predicted that if two massive bodies came together it would create such a huge ripple in space time that it should be detectable on Earth.

It was most recently demonstrated in the hit film film Interstellar.

In a segment that saw the crew visit a planet which fell within the gravitational grasp of a huge black hole, the event caused time to slow down massively.

Crew members on the planet barely aged while those on the ship were decades older on their return. 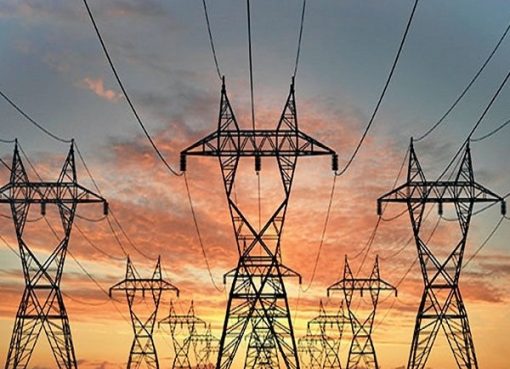 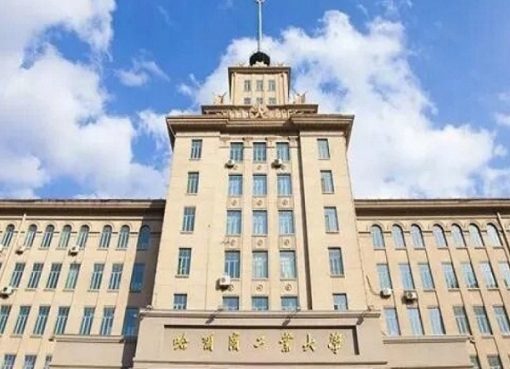 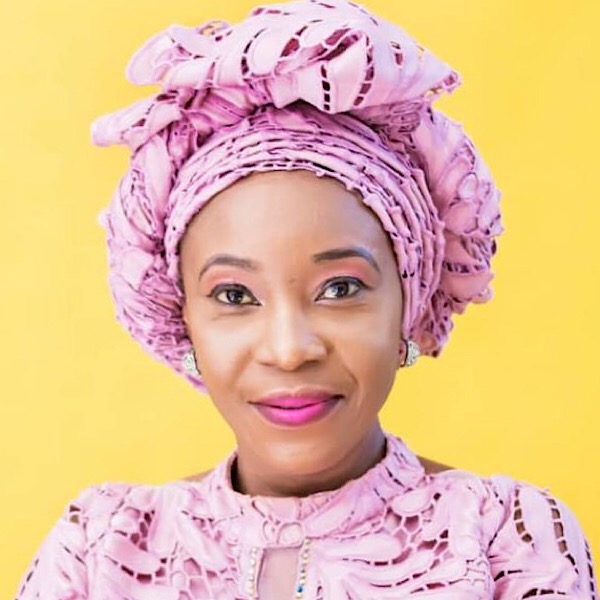