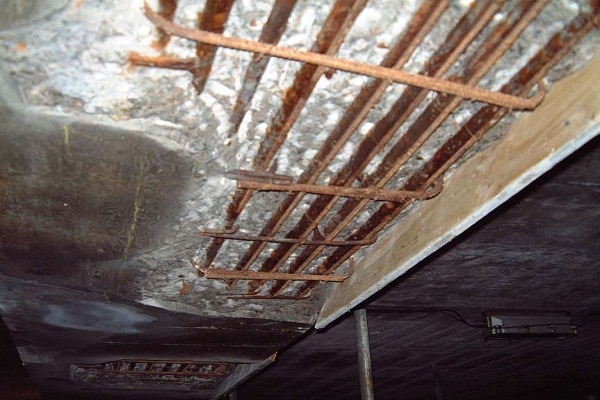 Concrete is more widely used than any other manmade material and has been a construction staple for centuries. The early use of primarily lime-based concrete by the Egyptians and Greeks dates back to 2000 B.C. In the mid-1800s, steel-reinforced concrete was developed using steel ropes, I-beams, and bars; and prestressed concrete was invented in 1928 by Eugène Freyssinet while working on the plans for the Halle Freyssinet, a Paris freight terminal still in use today.

According to NACE International member Dr. John P. Broomfield, FNACE, a consulting corrosion engineer and specialist in the corrosion of steel in concrete structures, several myths concerning the cause of reinforced concrete deterioration prevailed in the mid-twentieth century—that corrosion of steel reinforcement is only caused by stray direct current (DC) (e.g., from streetcars); chlorides are fully chemically bound by the cement paste (tricalcium aluminate [C3A]), so seawater and calcium chloride (CaCl2) are acceptable in the concrete mix design; and potholes forming on concrete bridge decks are due to poor construction. “Our understanding of the durability of reinforced concrete has improved considerably from the days when all concrete failure was blamed on the contractor or the supplier and the chemical binding of chloride by the cement was assumed to mean that chlorides in concrete were benign,” says Broomfield. Steel corrosion is by far the biggest durability issue for reinforced concrete structures, although other deterioration mechanisms will lead to attack of the concrete itself, he notes, such as freeze-thaw scaling, moisture, acid or sulfate attack, thermal cracking, shrinkage from drying, impact, erosion, and wear.

Generally, concrete deterioration is gradual; and, depending on their service and environment, steel-reinforced concrete structures can stand for decades before the onset of steel corrosion. But why doesn’t the steel corrode for such a long time, when the requisites for corrosion of steel are present in concrete (a vulnerable metal, sufficient ambient heat, moisture, and oxygen)? Although concrete’ s porous structure contains moisture and oxygen, Broomfield explains, due to its high alkalinity (a pH level or 11 or higher), hydroxyl ions (OH-) in the pore water of the surrounding concrete form a protective, passive oxide layer on the reinforcing steel that reduces the corrosion rate to a negligible level. From a corrosion engineer’ s perspective, this is an ideal coating because it is self-maintaining and self-repairing—it forms and reforms as temperature and moisture levels go up and down, Broomfield says.

Chloride-induced corrosion is the single largest problem for aging concrete highway bridges, particularly in marine environments or areas where road salts are used. Chlorides can be cast into concrete or diffuse in from the external environment (e.g. seawater or deicing salt). When the Cl- reach the reinforcing steel, they compete with the OH- that form the passive oxide layer and are able to penetrate the layer and cause a defect. A build-up of Cl-can cause the steel’s passive oxide layer to break down, which allows corrosion to initiate. In areas on the steel surface with low amounts of OH- due to voids in the concrete, Cl- can cause pitting. Broomfield notes that the probability of corrosion increases as the amount of Cl- on the steel’s surface increases, with a 50% probability of corrosion when the amount of Cl- at the concrete/steel interface reaches 0.4 wt% of the cement content and an 80 to 90% probability of corrosion when Cl- amounts go up to ~1.0 wt%. Carbonation occurs when atmospheric carbon dioxide (CO2), an acidic gas, progressively penetrates the concrete over time and neutralizes its alkalinity. Carbonation slowly moves through the concrete as a front, and changes the concrete’s chemistry as it progresses. Once the depth of the carbonation front reaches the reinforcing steel, which could take several decades, it terminates the steel’ s ability to form a passive layer because the environment is no longer alkaline. This makes the steel vulnerable to corrosion.

The presence of oxygen initiates surface corrosion of the reinforcing steel through oxidation, where iron oxides form on the steel’ s surface. These oxides, although porous and flaky, have a larger volume than the original steel—up to six times greater depending on the composition of the corrosion products, Broomfield notes. The iron oxides expand against the concrete, and the resulting stress causes the concrete cover to crack and eventually spall. He comments that a steel loss of only 0.05 to 0.10 mm (0.002 to 0.004 in) will cause concrete to spall. While cracking and spalling of concrete cover is undesirable, it does serve as an early warning sign that the reinforcing steel is at risk of corrosion-induced structural failure; although catastrophic failures have been rare. Most concrete structural failures have been associated with corrosion of tensioned steel cables in post-tensioned bridges, where accessing the grouted cables for corrosion inspection is difficult.

Reinforcing steel corrosion in concrete can happen under oxygen-starved conditions as well, says Broomfield. In these situations, with oxygen only at the cathodic areas of steel, the corrosion products stay in solution at the anode and the steel dissolves without forming a solid product at the steel/concrete interface. He describes an incident when a prestressed concrete bridge pile was repaired by installing a high-quality concrete jacket over an area damaged from corrosion. Several years later, the jacket was opened for inspection. Although the jacket was in good condition and didn’t show any signs of damage, chlorides in the pile’ s original concrete underneath the jacket caused portions of the steel tendons to completely corrode and break, leaving virtually no reinforcement capability in the pile. Because the concrete was saturated with seawater, the iron had dissolved in places on the steel reinforcement rather than form expansive corrosion products that put stress on the concrete. “What you don’ t want is a situation like this, where you’ ve got no early warning sign [of corrosion] whatsoever,” he says.

Typically, Broomfield notes, the carbonation and chloride diffusion processes take many years to reach the reinforcing steel in concrete, which is known as time to corrosion initiation. The time it takes for chloride diffusion or carbonation to travel through the concrete cover and initiate corrosion on reinforcing steel can be modeled mathematically using software1 that incorporates Fick’s laws of diffusion, he adds. The time to initiation is a function of the thickness of the concrete cover over the reinforcement, the quality of the concrete, and the environment; and this information is usually obtained by surveying the structure and collecting data such as the structure’ s age, chloride levels at progressive depths into the concrete, and the carbonation depth.

The time period from corrosion initiation, when the passive layer is damaged, to the first signs of corrosion damage is known as the active corrosion time. This time frame also can be modelled with equations that calculate the time until cracking. This can be calculated from the corrosion rate, concrete strength, cover depth, and rebar diameter. The equations can be used to predict the time to first crack, as well as the time until a =1 mm crack appears on the surface of the cover concrete. This is a much shorter time period than time to corrosion initiation—typically one to five years—and is dependent on the corrosion rate. “Generally we’ re more concerned with time to initiation, which should be decades,” Broomfield says. “But if a structure is already beginning to crack and spall, the client will ask, ‘How much cracking and spalling am I going to get in one year, five years, or 10 years?’ With these measurements, we can estimate how much concrete is going to fall off the structure or how much cracking we will get per year, and help the client to make repair decisions.”

If chloride-contaminated concrete remains on the reinforcing steel adjacent to the patch repair, however, the steel in areas around the patch will become anodic and start to corrode. Unless all chloride contamination around the patch has been removed (which can be a difficult process, particularly in a marine environment) even a high-quality patch repair can promote the formation of corroding anodes around it and spread the corrosion process rather than control it. An analysis of over 230 repaired reinforced concrete structures found that 20% failed within five years, 60% failed within 10 years, and 90% within 25 years.2 The principal causes of failure were identified as cracking, debonding of patch repairs and coatings, and continued corrosion. Broomfield notes that several industry standards, such as NACE standard SP0390-2009,3 provide maintenance and rehabilitation considerations for concrete repairs.

“The understanding of concrete durability issues has improved significantly in the last 50 years, and particularly the causes, assessment, and treatment of steel reinforcement corrosion,” Broomfield says. “However, mistakes are still made in carrying out adequate assessment to avert failure, carrying out adequate repairs, and applying corrosion control techniques.” To apply the most appropriate repair and corrosion control techniques, he comments, a full understanding of concrete durability is required. Models can be used for determining the durability and corrosion resistance of reinforced concrete structures, and industry standards and guidance documents can help ensure these structures achieve their desired service life. Honeycomb Repair In Concrete Structures- How It Is Done?