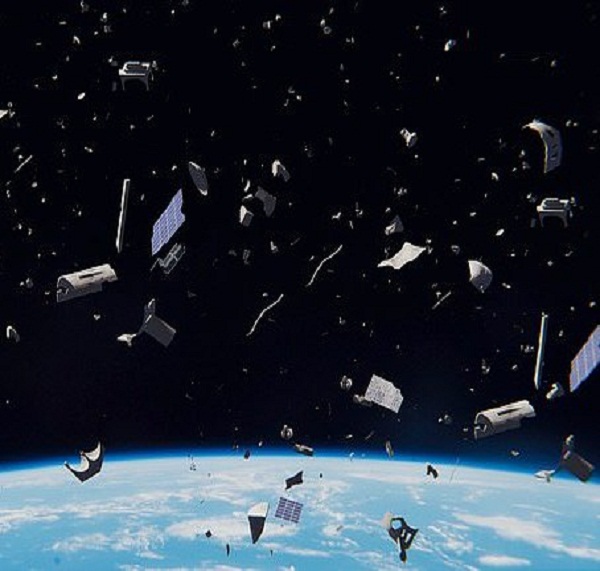 Space junk from satellites, rockets and humans is now cluttering Earth’s orbit to such an extent that some fear it could one day lead to a catastrophic collision.

But scientists believe they have the answer for how to tackle the problem — and it could even help refuel spacecraft circling hundreds of miles above our heads. 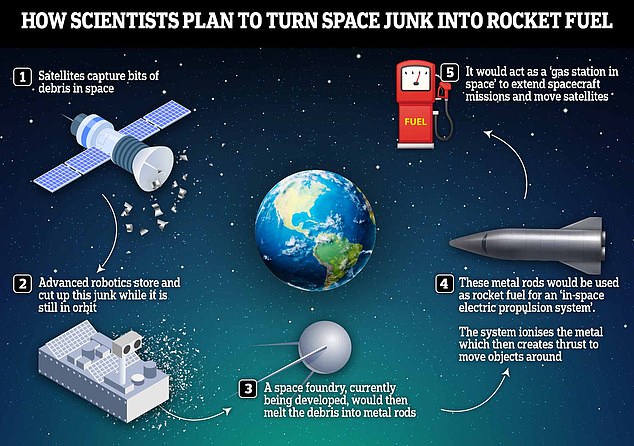 Space junk solution? Scientists believe they have the answer for how to tackle the problem of debris in Earth’s orbit. It would involved capturing space junk, cutting it up and melting it into metal rods that can be used for an ‘in-space electric propulsion system’. The process is shown

WHAT IS SPACE JUNK?

There are an estimated 170 million pieces of so-called ‘space junk’ in orbit alongside some $700 billion (£555bn) of space infrastructure.

This debris can be as big as spent rocket stages or as small as paint flakes.

But only 22,000 are tracked, and with the fragments able to travel at speeds above 16,777 mph (27,000kmh), even tiny pieces could seriously damage or destroy satellites.

However, traditional gripping methods don’t work in space, as suction cups do not function in a vacuum and temperatures are too cold for substances like tape and glue.

Grippers based around magnets are useless because most of the debris in orbit around Earth is not magnetic.

Most proposed solutions, including debris harpoons, either require or cause forceful interaction with the debris, which could push those objects in unintended, unpredictable directions.

Scientists point to two events that have badly worsened the problem of space junk.

The first was in February 2009, when an Iridium telecoms satellite and Kosmos-2251, a Russian military satellite, accidentally collided.

The second was in January 2007, when China tested an anti-satellite weapon on an old Fengyun weather satellite.

According to the European Space Agency (ESA), there is approximately 9,200 tonnes of space debris now floating aimlessly above the Earth.

This alarming proliferation of junk is already beginning to interfere with current low orbit missions and experts fear it will only get worse unless drastic action is taken.

One such idea involves an international effort to recycle this dangerous debris into rocket fuel — while still in orbit.

It would involve satellites capturing bits of space junk, which whizzes around at speeds of up to 17,000mph, before it is stored and then cut up using advanced robotics.

A space foundry that is currently being developed would then melt the debris into metal rods, which would in turn be used as rocket fuel for an ‘in-space electric propulsion system’.

The first stage of the vision has already been demonstrated by Japanese start-up Astroscale.

Its craft, called ELSA-d, used magnets to gather up space junk after being launched in March this year.

Separately, US-based Nanorocks is working on a plan to then cut up this debris while it is still in orbit and prepare it for the next recycling stage.

Also involved in the collaboration is CisLunar Industries.

The American company is developing a space foundry to melt the junk into metal rods, which can then be used for fuel through a propulsion system that ionises the metal and creates thrust to move objects around in orbit.

This system has been created by Australian firm Neumann Space as a way to extend spacecraft missions and move or de-orbit satellites.

The firm’s chief executive Herve Astier told the Guardian that when Neumann was approached to be part of a supply chain to melt metal in space, he thought it was a futuristic plan that would not be ‘as easy as it looks’.

He added: ‘But they got a grant from Nasa so we built a prototype and it works.

‘One can grab a piece of debris, one can cut the debris open, one can melt the debris, and we can use that.’

Astier said it would be ‘like developing a gas station in space’.

As the commercial space sector continues to grow at a rapid rate, firms are vying to launch constellations of satellites and new experimental craft into low Earth orbit.

This has left astronomers frustrated and struggling because of ‘blots in the sky’ that make observations harder and less accurate, as well as concerns over space junk.

There are longer-term concerns that this ‘free for all approach’ to space will one day result in a disastrous collision that could lead to a loss of connectivity on Earth, or in an extreme case, loss of life if a crewed spacecraft were to be hit.

The worst-case scenario is a series of collisions between smaller and smaller bits of space junk until orbits become unusable, known as the Kessler Effect.

It was proposed in 1978 by NASA scientist Donald Kessler, who said it could make it impossible for humans to leave the Earth.

There are millions of pieces of debris littering space, travelling at hundreds or thousands of miles per hour, and each could destroy a satellite, telescope or even a spacecraft on its way to the ISS, the moon or Mars.

The UK Space Agency has previously revealed hopes of brokering an international consensus on responsible behaviours in space, working with industry to develop licensing and regulation frameworks to promote safety in orbit.

There are an estimated 170 million pieces of space junk in orbit alongside some $700 billion (£555bn) of space infrastructure.

This debris can be as big as spent rocket stages or as small as paint flakes.

But only 22,000 are tracked, and with the fragments able to travel at speeds above 16,777 mph (27,000kmh), even tiny pieces could seriously damage or destroy satellites.

Scientists have previously pointed to two events that have badly worsened the problem of space debris.

The first was in February 2009, when an Iridium telecoms satellite and Kosmos-2251, a Russian military satellite, accidentally collided.

The second was in January 2007, when China tested an anti-satellite weapon on an old Fengyun weather satellite.

Elon Musk’s SpaceX has launched more than 1,600 of its ‘Starlink’ space internet satellites into orbit.

The constellation, informally known as Starlink, is under development at SpaceX’s facilities in Redmond, Washington.

Its goal is to beam superfast internet into your home from space.

While satellite internet has been around for a while, it has suffered from high latency and unreliable connections.

Starlink is different. SpaceX says putting a ‘constellation’ of satellites in low earth orbit would provide high-speed, cable-like internet all over the world.

The billionaire’s company wants to create the global system to help it generate more cash.

Musk has previously said the venture could give three billion people who currently do not have access to the internet a cheap way of getting online.

It could also help fund a future city on Mars.

Helping humanity reach the red planet is one of Musk’s long-stated aims and was what inspired him to start SpaceX.

The company has previously filed plans with the Federal Communications Commission (FCC) to launch 4,425 satellites into orbit above the Earth — three times as many that are currently in operation.

‘Once fully deployed, the SpaceX system will pass over virtually all parts of the Earth’s surface and therefore, in principle, have the ability to provide ubiquitous global service,’ the firm said.

‘Every point on the Earth’s surface will see, at all times, a SpaceX satellite.’

The network will provide internet access to the US and the rest of the world, it added.

It is expected to take more than five years and $9.8 billion (£7.1bn) of investment, although satellite internet has proved an expensive market in the past and analysts expect the final bill will be higher.

Musk compared the project to ‘rebuilding the internet in space’, as it would reduce reliance on the existing network of undersea fibre-optic cables which criss-cross the planet.

In the US, the FCC welcomed the scheme as a way to provide internet connections to more people.

HOW MANY ITEMS ARE THERE IN ORBIT? 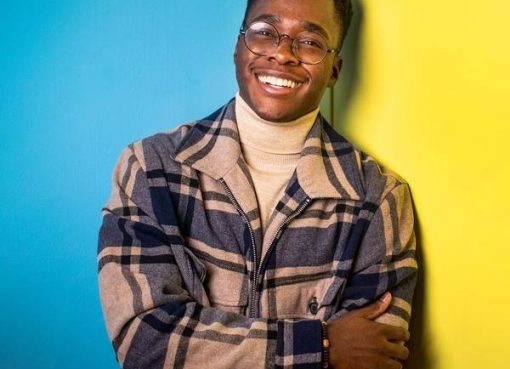 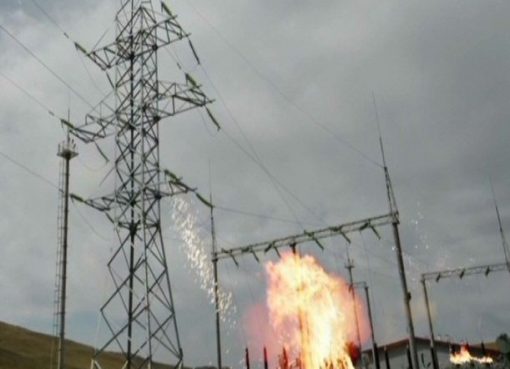 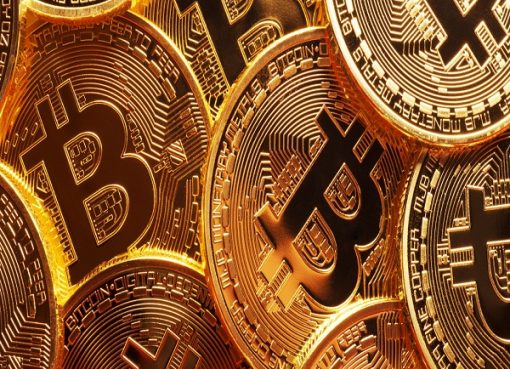