Skip to content
Home > Mechanical > Automotive > Apollo RT6, Is This The Robotaxi Of The Future? The Apollo RT6 has a detachable steering wheel to allow passengers more space, and can be hailed with an app.

This is the first autonomous vehicle (AV) from Baidu that does not require retrofitting technology to a conventional car.

A senior corporate vice president at Baidu, which has been described as China’s answer to Google, claims that the AV’s driving capability is equivalent to a skilled driver with 20 years of experience.

Baidu hopes to put the cab in operation in China in the second half 2023 as part of Apollo Go, its autonomous ride-hailing service. 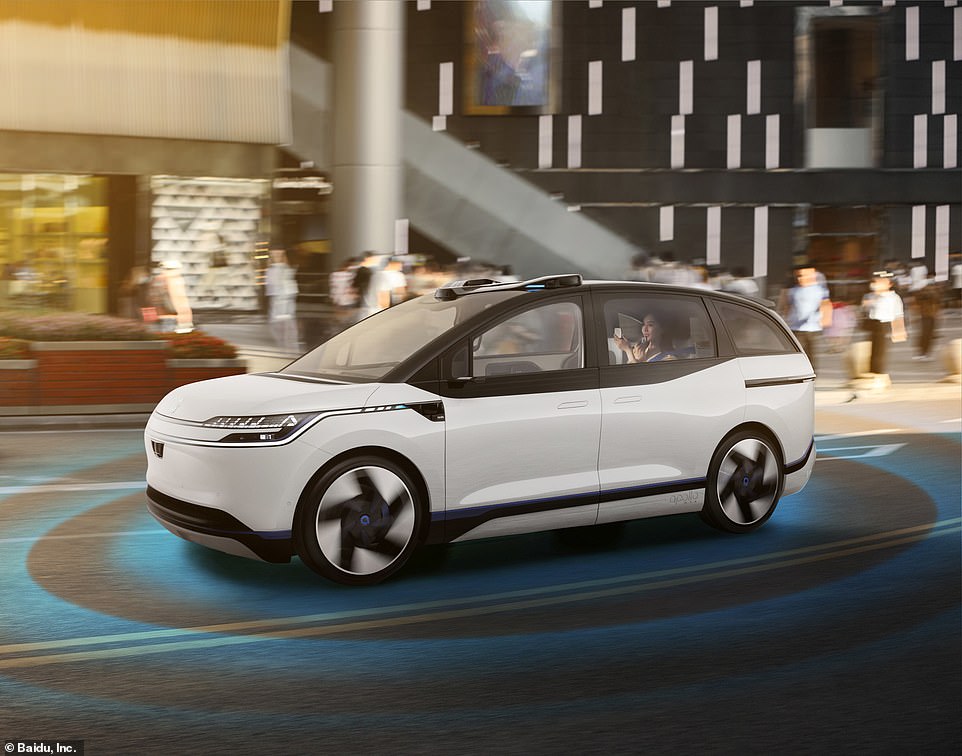 The Apollo RT6 has a detachable steering wheel to allow passengers more space, and can be hailed with the Apollo Go app, that is already in operation in cities in China 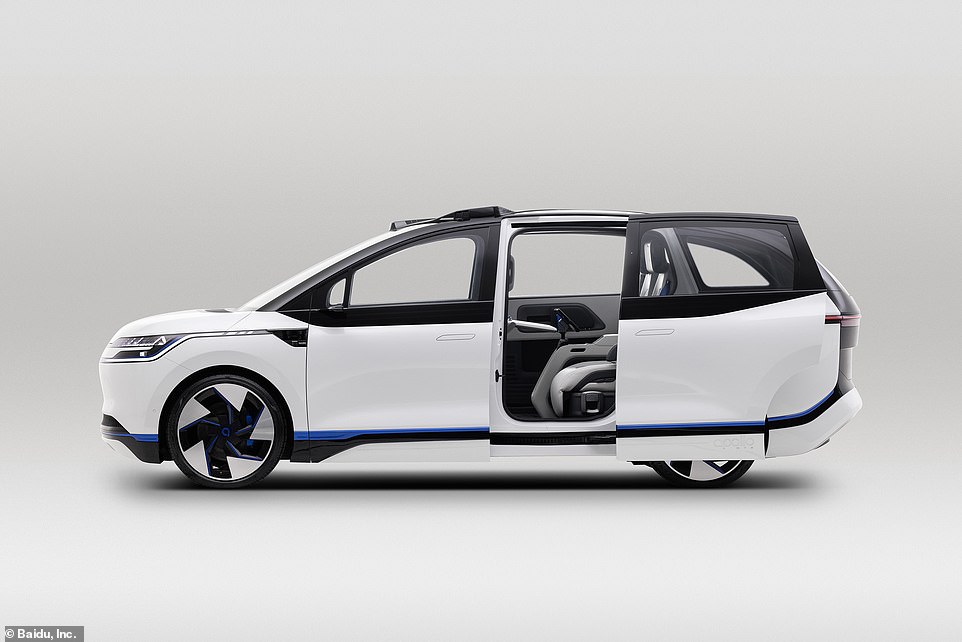 Apollo RT6 has a futuristic exterior with intelligent electric sliding doors, that can be opened via Bluetooth connection, password input or a phone app 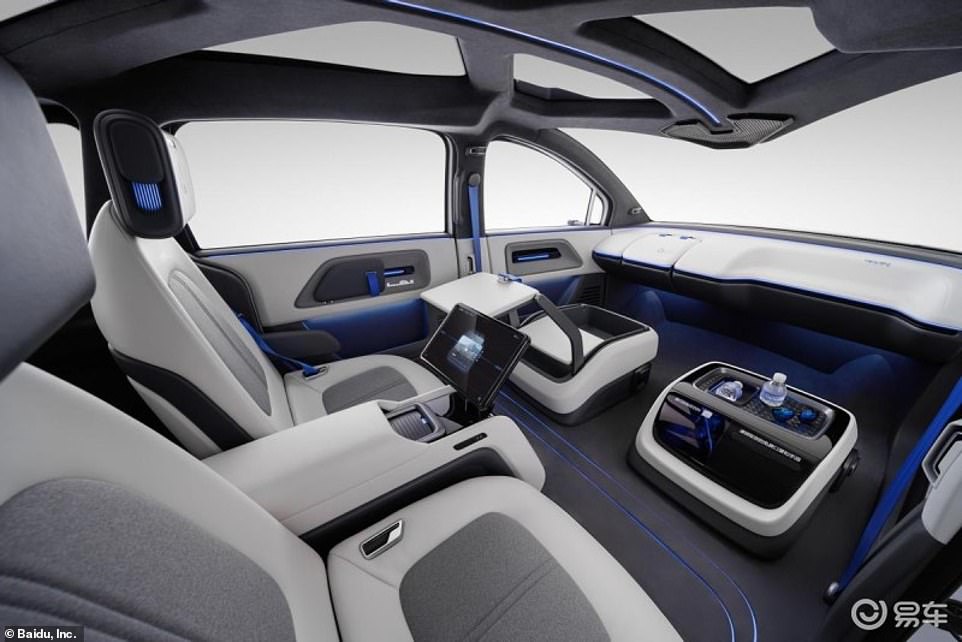 The battery-electric RT6 can seat between two and four passengers depending on whether the steering wheel is engaged.

Li, co-founder and CEO of Baidu, said: ‘This massive cost reduction will enable us to deploy tens of thousands of AVs across China.

‘We are moving towards a future where taking a robotaxi will be half the cost of taking a taxi today.’

Apollo RT6 is Baidu’s sixth generation AV, and costs significantly less to develop than the other models.

For comparison, Baidu launched Apollo Moon, its fifth generation unmanned vehicle, in June 2021, cost about $71,000 (£59,000) for the vehicle and driverless kit.

The battery-electric RT6 can seat between two and four passengers depending on whether the steering wheel is engaged.

The detachable steering wheel also allows for the installation of desktops, games consoles, luggage racks and vending machines within its 15.6 feet by 6.1 feet floor space.

According to Baidu, its 9.3-foot wheelbase makes it the size of an A-class car, but it has the space of a B-class car and the experience of a C-class car.

It is a cross between an SUV and a minivan, and offers 41 inches (105 cm) of legroom for the two seats positioned in the rear of the vehicle, atop a completely flat floor.

Apollo RT6 has a futuristic exterior with intelligent electric sliding doors, that can be opened via Bluetooth connection, password input or a phone app.

These help the car achieve over 656 feet (200 metres) of accurate long distance perception on all sides in complex urban environments.

HOW DO SELF-DRIVING CARS ‘SEE’?

Self-driving cars often use a combination of normal two-dimensional cameras and depth-sensing ‘LiDAR’ units to recognise the world around them.

They are trained with a wealth of information and vast databases of hundreds of thousands of clips which are processed using artificial intelligence to accurately identify people, signs and hazards.

In LiDAR (light detection and ranging) scanning, one or more lasers send out short pulses, which bounce back when they hit an obstacle.

These sensors constantly scan the surrounding areas looking for information, acting as the ‘eyes’ of the car.

While the units supply depth information, their low resolution makes it hard to detect small, faraway objects without help from a normal camera linked to it in real time.

A network of computers process information, which together with GPS, generates a real-time map of moving and stationary objects in the environment.

It is Baidu’s first vehicle model built on its in-house self-driving platform Xinghe, and has Level 4 automatic driving capability that is stronger than its previous model.

This is opposed to installing autonomous driving kits onto existing vehicles, which it claims is less reliabile.

Level 4 technology means its systems can operate without a driver but must be pre-loaded with a detailed map, thus limiting the areas where the vehicles can operate.

The production-ready model uses seven ‘redundant’ systems, which means the backup system can still function if any single component or system fails.

Baidu says the safety of its new vehicle is backed by a total test mileage of over 32 million kilometres (20 million miles).

Baidu has not yet revealed how many miles it can travel on a fully charged battery.

Baidu claims the Apollo RT6 will initially join its existing Apollo Go fleet as part of a small-scale trial, but intends to eventually launch 100,000 of them on the road.

Apollo Go has expanded to 10 cities in China, including Shenzhen, Shanghai and Beijing, since its launch in 2020, and has provided over a million rides so far.

The company announced that on Wednesday it has also started charging fares in Beijing for driverless rides in its fifth-generation robotaxis, allowing it to commercialise its business.

Thanks to recent advances in manufacturing lowering production costs, Baidu plans to extend its ride-hailing service to 65 cities by 2025 and 100 cities by 2030.

Baidu is best known for its search engine and online advertising services, but in recent years has invested heavily in autonomous driving and artificial intelligence technology, including automated personal assistants and AI chips. TStv Future In The Nigerian Market Reasons Behind The Success Or Failure Of A Business