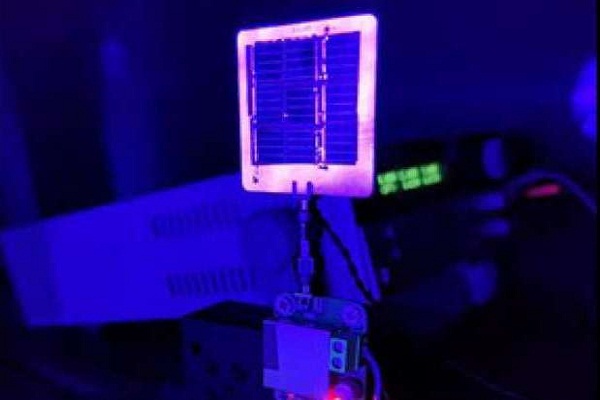 Although solar cells are typically designed to turn light into power, researchers have shown that they can also be used to achieve underwater wireless optical communication with high data rates. The new approach—which used an array of series-connected solar cells as detectors—could offer a cost-effective, low-energy way to transmit data underwater.

In the journal Optics Letters, Xu and colleagues report on laboratory experiments in which they used an array of commercially available solar cells to create an optimized lens-free system for high-speed optical detection underwater. Solar cells offer a much larger detection area than the photodiodes traditionally used as detectors in wireless optical communication.

“To the best of our knowledge, we demonstrated the highest bandwidth ever achieved for a commercial silicon solar panel-based optical communication system with a large detection area,” said Xu. “This type of system could even allow data exchange and power generation with one device.”

Compared to using radio or acoustic waves, light-based underwater wireless communication exhibits higher speed, lower latency and requires less power. However, most long-distance high-speed optical systems are not practical for underwater implementation because they require strict alignment between the transmitter emitting the light and the receiver that detects the incoming light signal. 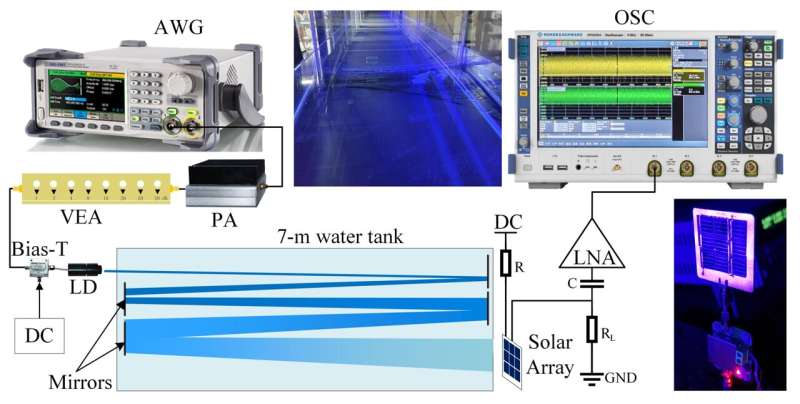 Because solar cells detect light from a large area and convert it to an electrical signal, using them as detectors can ease the transmitter-receiver alignment requirement in an underwater wireless communication system. However, it has been difficult to achieve high bandwidth because solar cells are optimized for energy harvesting rather than communication.

The researchers tested the new design, which used a 3×3 solar array to create a detection area of 3.4 × 3.4 centimeters, in a 7-meter-long water tank that emulated an underwater channel. Mirrors were used to extend the pathlength of the optical signal, creating a transmission distance of 35 meters. The system showed reliable stability, low power consumption and high performance. As the size of the solar array increases from 1×1 to 3×3, the −20-dB bandwidth increases from 4.4 MHz to 24.2 MHz.

Even though a simple modulation scheme was used, the new system exhibited a much higher detection bandwidth—which leads to a higher data rate—than has been reported in other studies using commercial silicon solar cells with a large detection area as detectors. Applying a reverse bias voltage of 90 V boosted the bandwidth further, allowing them to achieve a −20-dB bandwidth of 63.4 MHz. This bandwidth enabled a 35-m/150-Mbps underwater wireless optical link using the simplest form of amplitude-shift keying modulation.

“Because solar cells are mass produced, the proposed scheme is quite cost effective,” said Xu. “Beyond the underwater world, this type of detector could also be used in visible light communication, a type of wireless communication that uses visible light from LEDs and other sources to transmit data across distances.”

To optimize the system for real-world applications in underwater communication, the researchers plan to next study its performance with weak optical signals. This will show how well it works in muddy water and with movement. They are also working to make the system more practical by fine tuning key parameters like the number of solar cells in the array and the required reverse bias voltage 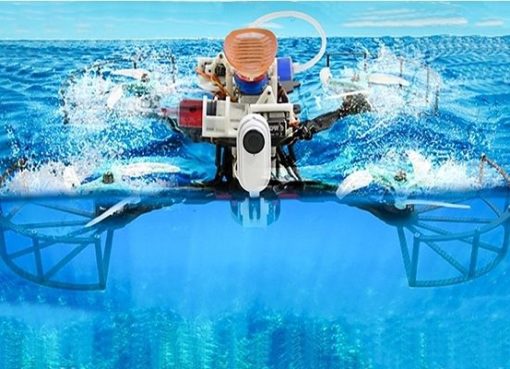 In Less Than A Second, Drone Transits From Air To Water

Only 3000 Kilometres Of Nigeria’s Waterways Are Navigable – NIWA 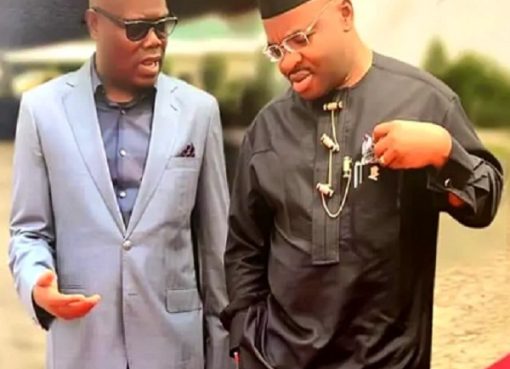